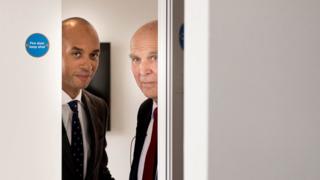 When it comes to political parties, he is The Changing Man.

Just four years ago he wanted to lead Labour – then pulled out of the race.

Just four months ago he pulled out of Labour completely as a founder member of the Independent Group of MPs.

This transmogrified in to Change UK, a formal political party, in order to fight the European elections.

After dismal results, Chuka Umunna suggested to colleagues that they should become a “Remain movement” which didn’t stand candidates in elections.

Not everyone agreed, and the nascent party split.

On Friday he joined his third political party this year… a kind of accelerated version of David Owen.

At his press conference with Sir Vince Cable, Mr Umunna told me that the outgoing Lib Dem leader had been right, that having the infrastructure of an existing party was important and it had been a “mistake” to set up a new one.

I asked if his latest party would be his final resting place in UK politics and he said, quite simply: “Yes.”

But is Mr Umunna an asset or a liability to the Liberal Democrats?

He is a consummate media performer. He strongly articulates the case – their case – for Remain.

Like many in Labour, he disagrees with the “speed and severity” of spending cuts under the Conservative-Liberal Democrat coalition government.

But now he is trying to persuade former colleagues that Brexit is the greatest impediment to ending austerity and that they too should get behind an avowedly Remain party.

But will he really help to attract further defectors to the Lib Dem banner?

I am told that two more independent MPs are likely to travel the same political road.

But they are yet to overcome “local sensitivities” – ie whether Lib Dem parliamentary candidates are willingly going to stand aside for them.

As one Lib Dem insider confided: “We are not organising the press conferences yet.”

Mr Umunna doesn’t seem to have the same problem in Streatham and he says he is committed to his constituency.

But he isn’t willing to test whether voters in this strongly Remain seat would back him in his new colours by calling by-election.

And many of his former Labour colleagues don’t appear to be considering joining him in his new political home.