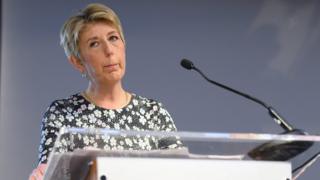 Image copyright Getty Images Image caption Angela Smith said her constituency work would continue as usual until the next general election “whenever that comes”.

A former Labour MP has said she will not stand in her current constituency at the next general election.

Angela Smith was a founding member of Change UK before joining the Liberal Democrats last month.

She confirmed she will not stand for election in South Yorkshire where she has been an MP for 14 years.

Mrs Smith will instead seek to unseat senior Conservative Sir Graham Brady in Altrincham and Sale West. The wider borough voted against Brexit.

At the 2016 EU referendum the people of Trafford voted 57.7% in favour of Remain.

“I am now ready to take the fight to the Tories in Altrincham and Sale West and finish the job to stop Brexit,” Mrs Smith said.

Mrs Smith was born and raised in Grimsby and became the MP for Sheffield Hillsborough in 2005.

The seat was abolished in 2010 and she became the MP for the newly created Penistone and Stocksbridge constituency.

In February, she quit Labour to form the Change UK party with six other MPs but drew criticism when she appeared to use the term “funny tinge” during a televised discussion about race.

Mrs Smith left Change UK in June after the party’s disappointing performance in the EU elections, when it failed to get a single MEP elected.

In September, she joined the Lib Dems, calling them “the strongest party to stop Brexit”.

Her decision to stand in Altrincham and Sale West follows the announcement that Chuka Umunna and Luciana Berger will stand in pro-Remain seats for the Lib Dems.

Sir Graham, who supported the Leave campaign, has represented the s