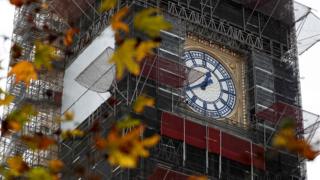 Commons authorities have cast doubt on the idea that public donations could pay for the cost of making Big Ben chime when the UK leaves the EU.

Big Ben has been largely silent since refurbishment of its tower began.

But Boris Johnson has suggested crowdfunding could cover the costs of getting the bell working on 31 January.

The House of Commons Commission has said the estimated cost of up to £500,000 cannot be justified and using donations would be “unprecedented”.

An amendment to the PM’s Brexit bill, which would have required it to chime on Brexit day at 23:00 GMT, failed last week.

But on Tuesday, Mr Johnson told BBC Breakfast: “We’re working up a plan so people can bung a bob for a Big Ben bong, because there are some people who want to.”

The commission said ongoing work to the Palace of Westminster’s Elizabeth Tower meant getting the chimes working again now would cost between £350,000 and £500,000.

The body – a group of MPs and officials responsible for the day-to-day running of Parliament – later issued a second statement raising concerns about any type of crowdfunding.

Any fundraising would have to be “consistent with principles of propriety and proper oversight of public expenditure”, it said.

It added that the Commons had a “well-established” process by which it approved spending which allowed it to “preserve its constitutional position in relation to government”.

When the restoration work started in 2017, it was agreed that Big Ben should sound for Remembrance Sunday, Armistice Day and New Year’s Eve.

According to the commission, this arrangement was made so the project team could plan its works around the dates well in advance.

The House of Commons Commission’s estimate for the cost of sounding Big Ben on Brexit day is made up of two separate parts:

The commission says the floor in the belfry has been removed and there would be a significant cost to put in and then remove a temporary floor.

As well as the floor, the £120,000 figure also includes the cost of installing and dismantling the temporary mechanism (an electric bell hammer) to sound the bell.