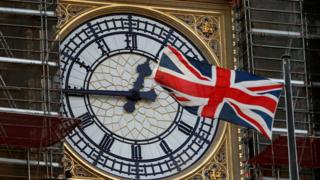 It would cost £500,000 for Big Ben to strike at the moment of Brexit, according to the prime minister.

Boris Johnson said Big Ben’s clapper had been removed during the current restoration project and temporarily replacing it would come at a considerable cost.

The idea for the bells to ring out at 23:00 GMT on 31 January – the time and date the UK is due to officially leave the EU (it’ll be midnight in Brussels) – was first floated by pro-Brexit MPs.

Why would it cost so much?

The House of Commons Commission, which is responsible for maintenance in Parliament, estimates the cost of sounding Big Ben on Brexit day is between £320,000 and £500,000.

Its estimate is made up of two separate costs:

The commission says the floor in the belfry has been removed and there would be a significant cost to put in and then remove a temporary floor.

As well as the floor, the £120,000 figure also includes the cost of installing and dismantling the temporary mechanism (an electric bell hammer) to sound the bell.

Delaying the restoration work already taking place to enable the bongs would also add £100,000 a week to the bill.

As such, the commission concludes that the cost is not justified – although it says it will respond to any decision MPs make.

What about New Year’s Eve?

Despite the repair works, Big Ben does still occasionally chime – as recently as New Year’s Eve.

When the restoration work started in 2017, it was agreed that Big Ben should sound for Remembrance Sunday, Armistice Day and New Year’s Eve.

According to the House of Commons, this arrangement allowed the project team to plan its works around the dates well in advance.

That means that any ringing beyond these dates will require further funds to be spent.

According to the Commons, it was decided that the belfry floor work would begin on 2 January in order not to interfere with New Year’s Eve.