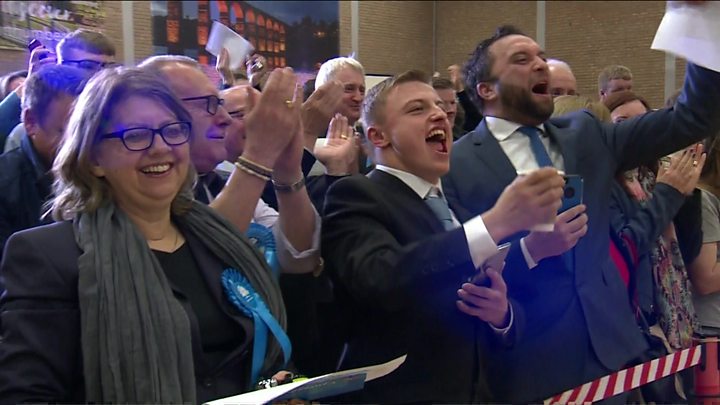 The Conservatives have taken Blyth Valley which has been Labour since it was created in 1950, in the first shock result of the general election.

There was also a win for the Tories in Durham North, where Labour’s Laura Pidcock lost to Richard Holden.

Labour has held on to all the other seats in the region, but in almost every case with a reduced majority.

In Wansbeck, Labour Party chairman Ian Lavery retained the seat but with his majority down from 10,435 to 814.

“This isn’t about Jeremy Corbyn – this is about Brexit,” he said.

“This is about the re-run of the 2016 referendum. You ignore democracy at your peril.”

It is the first time that Blyth Valley, a former mining area which voted Leave in the EU referendum, will have a Conservative MP.

The constituency’s former incumbent, Ronnie Campbell, stood down after more than 30 years.

Speaking after the result, Mr Levy thanked his team, his wife, the people of Blyth Valley and Boris Johnson.

“This is a huge responsibility I have taken on,” he said.

“I will be going to London on the train on Monday, we’re going to get Brexit done and build a strong economy for the UK.”

Prior to the loss of her Durham North seat, Laura Pidcock was seen as a potential leadership contender.

Its new MP, Richard Holden, promised in a tweet that he would “represent every one in every part of this beautiful constituency”.

Thank you so much to the people of #NorthWestDurham for electing me as your MP.

It’s truly the greatest honour that can be bestowed on anyone.

I will represent every one in every part of this beautiful constituency.

Newcastle Central was the first seat in the UK to declare,