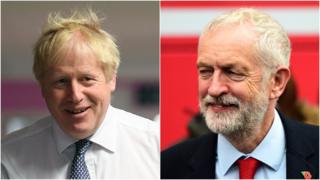 The BBC will host a head-to-head debate between Boris Johnson and Jeremy Corbyn in the run-up to the general election.

The Conservative and Labour leaders will face off live in Southampton on 6 December – six days before the poll.

A seven-way podium debate will also take place between senior figures from the UK’s major political parties on 29 November, live from Cardiff.

And the BBC will broadcast several Question Time specials, including a show focused on younger audiences.

Today presenter and former BBC political editor Nick Robinson, who will present the two debates, said he hoped they would “illuminate the choice we all face between competing parties, leaders, policies and visions for the country”.

What is being shown and when?

First up is the Question Time Leaders’ Special – hosted by Fiona Bruce – which will take place on Friday 22 November in Cardiff and be shown on BBC One.

The leaders of the Conservatives, Labour, SNP and Liberal Democrats will each take questions from the audience for 30 minutes.

Two further 30-minute Question Time specials are planned with the leader of the Brexit Party, Nigel Farage, and one of the co-leaders of the Green Party – either Sian Berry or Jonathan Bartley.

Fiona Bruce said: “Question Time has a proud history of giving the public – the voters – the chance to put their points and questions directly to their elected representatives. That’s never more important than during an election campaign.”

A final Question Time special with a selected audiences of under-30s – hosted by BBC 5 live’s Emma Barnett – will air at 20:30 GMT on Monday 9 December across BBC One, BBC Radio 1, 1Xtra and 5 Live.

Emma Barnett said: “Young voters and their needs should not be forgotten about by the party leaders this election. These people are at the beginning of their voting