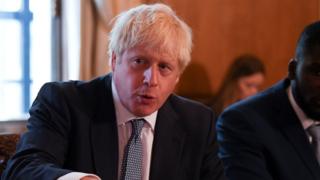 Boris Johnson has accused MPs “who think they can block Brexit” of a “terrible collaboration” with the European Union.

The prime minister said the EU had become less willing to compromise on a new deal with the UK because of the opposition to leaving in Parliament.

He said this increased the likelihood of the UK being “forced to leave with a no-deal” in October.

The EU has said the agreement struck by Theresa May is the only deal possible.

Speaking during a Facebook event hosted at Downing Street, Mr Johnson said he wanted to leave with a deal but “we need our European friends to compromise”.

“There’s a terrible kind of collaboration as it were, going on between people who think they can block Brexit in Parliament and our European friends,” he added.

“The more they think there’s a chance that Brexit can be blocked in Parliament, the more adamant they are in sticking to their position.”

His comments come after former Chancellor Philip Hammond said the PM’s negotiating stance increased the chance of a no-deal before the latest Brexit deadline of 31 October.

Mr Hammond told BBC Radio 4’s Today programme a no-deal exit would be “just as much a betrayal of the referendum result as not leaving at all”.

No 10 accused Mr Hammond of undermining the UK’s negotiating stance, and said he “did everything he could” to block preparations for leaving whilst he was in office.

The former chancellor rejected this suggestion in a tweet, saying he wanted to deliver Brexit “and voted to do so three times”.

Mr Johnson has said he wants to leave the EU with a deal, but the UK must leave “do or die” by the end of October.

He wants the EU to ditch the Irish border backstop plan from the deal negotiated by Mrs May, which was rejected three times by Parliament.

But the EU has continued to insist the policy – intended to guarantee there will not be a hard Irish border after Brexit – must remain and cannot be changed.

Many of those who voted against the deal had concerns over the backstop, which if implemented, would see Northern Ireland staying aligned to some rules of the EU single market.

It would also see the UK stay in a single customs territory with the EU, and align with current and future EU rules on competition and state aid.

These arrangements would apply unless and until both the EU and UK agreed they were no longer necessary.