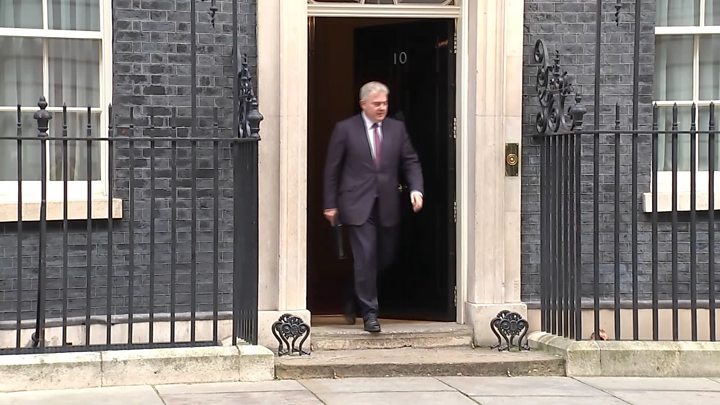 The first and deputy first ministers spoke to the new Northern Ireland secretary on Friday morning.

Mr Smith had helped to restore power-sharing at Stormont but was fired after just 204 days in the job.

Arlene Foster said she hopes Mr Lewis will cement the administration in NI, while Michelle O’Neill said an urgent meeting had been agreed with the SoS.

He is due in Belfast on Friday afternoon.

The Sinn Féin vice-president Michelle O’Neill said there were a number of issues to be discussed with Mr Lewis.

Spoke to Brandon Lewis this morning, we agreed to an urgent early meeting to discuss the range of issues on his desk, including; Legacy, bad faith on pensions, Brexit and political & financial commitments to make the Assembly & Executive sustainable

In a tweet, Mr Lewis said he was “looking forward” to his new role.

Good to speak to the First Minister @DUPleader & Deputy First Minster @moneillsf this morning. Looking forward to working with them & the executive team.

He also spoke to the tánaiste (Ireland’s deputy prime minister), who worked with Julian Smith to form New Decade, New Approach, the document which restored power-sharing at Stormont.

Good to talk to new SOSNI this morning. Very positive first call. Looking forward to working with @BrandonLewis for as long as I hold my role in Govt. NI deserves and needs a strong and positive relationship between UK & Irish Govts. https://t.co/sUVkMqLwho

Mr Lewis had a “very useful catch up” with the chief constable of the Police Service of Northern Ireland (PSNI), Simon Byrne.

Good introductory discussion with new SOS @BrandonLewis this morning providing him with an overview of current issues in @policeserviceNI and some of the unique challenges we face.