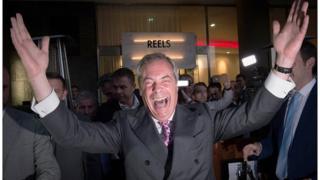 Brexit supporters have been given permission for a party in London’s Parliament Square at the moment the UK leaves the EU on 31 January.

Veteran Brexit campaigner Nigel Farage said it was “a big moment in the history of this nation to celebrate”.

The Office of the London Mayor said “provisional authorisation” had been given for the event.

It is understood the campaign group has been asked to provide assurances about the time it will take to clear the site after the event before final authorisation is given.

The government is looking at ways of marking the UK’s historic departure from the EU.

Boris Johnson has said he supports a crowd funding campaign to allow Big Ben to chime at 23.00 GMT.

The Elizabeth Tower, which houses the bell, is currently being refurbished and Big Ben is only chiming twice a year, on New Year’s Eve and Remembrance Sunday.

The parliamentary authorities have raised concerns about the cost to the taxpayer of bringing it back into use for a few minutes. The House of Commons Commission said it could cost up to £500,000 and MPs would need to explicitly approve such expenditure.

Leave Means Leave has launched a website to promote the event, in which people can sign up for details.

Its chairman, MEP Richard Tice, suggested it had even bigger plans.

I am delighted to confirm that Leave Means Leave has secured approval from the authorities for the Brexit Day celebration in Parliament Sq on 31 Jan. We are still working on Big Ben and fireworks! Do register on https://t.co/d2tfCaLwbF

Other MPs have called for church bells to ring out at the moment of exit. Former Tory leader Iain