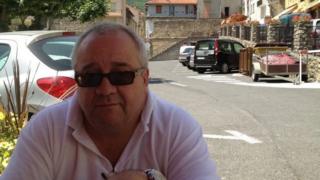 Tory MP Huw Merriman revealed this week he has lost four inches from his waistline as a result of Brexit-related stress, and it has since emerged that civil servants around the UK were offered counselling to help prepare for no deal.

But it is not just those directly involved in the political process who are suffering. Many people have contacted the BBC to say how recent political developments – or a lack of – are having an impact on their mental state.

Paul Groom, 61, had a heart attack two years ago and says both he and his cardiologist believe Brexit-related anxiety contributed towards it.

“I think about Brexit every day, no matter what,” says Mr Groom, who retired to France with his wife two years ago.

“We were living in Devon. We planned to sell our UK house and put the equity into our future financial plan. Then came Brexit.

“Our whole lives have been put on hold since then. We, along with many others, have no idea of where our lives are going to end up.”

“Me and my wife are both losing sleep over it,” adds Mr Groom, who voted to remain in 2016. He worries that he may have to move back to the UK.

“At the moment, if I wake up in the night the first thing I do is check my phone to see what else has happened in Parliament.”

The worry and subsequent lack of sleep, Mr Groom believes, has negatively affected his physical health as well as his mental wellbeing.

“I’ve never had heart issues before,” he says. “Lifestyle is the main cause but, as my cardiologist says, the stress doesn’t help.

“It makes you do things you wouldn’t have done otherwise – you eat differently, you maybe drink a bit more, you worry more, you have less sleep and all this can contribute to health issues like mine.”

And it’s not just those who voted remain who are suffering anxiety as a result of the UK’s current political journey.

Rachel Muse, 50, who voted to leave in 2016, says she thinks about Brexit every day.

“It’s something that very much plays on my mind,” says Ms Muse, who is a chef from Salisbury.

She adds: “I don’t have many hobbies –