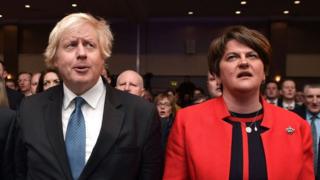 Is the DUP about to do a 180 and support checks in the Irish Sea as part of a Brexit deal?

Political u-turns aren’t unheard of, after all.

But in this case, it seems a good way off.

Newspaper reports that the DUP has privately shifted its red lines on the backstop were quickly – and publicly – panned by senior party figures.

But is that the full story?

It’s important to set out what the DUP has said it will accept, and how its tone has changed in recent days, causing a whiff of hope about a potential deal.

The party has always made protecting the union its main priority, delivering Brexit second – and in the early stages of the negotiations insisted there could be no deal that allowed any splits to develop between Northern Ireland and Great Britain.

It had, however, said it could accept certain regulatory differences that didn’t damage trade with Great Britain or undermine the Union.

The Northern Ireland Assembly would also need to have oversight of the process.

While continuing to oppose the backstop, the party has softened its language, saying it would be open to all-island “arrangements” on food standards and animal health, which could partially remove the need for some checks at the land border.

Image copyright Getty Images Image caption While continuing to oppose the backstop, the DUP has softened its language

They haven’t set out precisely what the arrangements could look like – don’t expect them to either.

The Times story hinted the DUP could accept EU rules in other areas too – which is perhaps why the party has pushed back so hard.

If the DUP is going to to back anything that even slightly resembles NI only accepting EU rules, they will need to be able to sell it.

Their ideas are being talked about by the prime minister as well.

Boris Johnson has found himself boxed in by Parliament, and by demanding the backstop disappear, he has few options left when it comes to getting a deal by his Halloween deadline.

So is a compromise of sorts coming down the tracks?