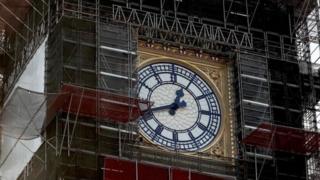 Millionaire businessman Arron Banks and the Leave Means Leave group have donated £50,000 to a campaign to make Big Ben ring when the UK leaves the EU.

Big Ben is being renovated, but the PM this week suggested a fund be set up to make it chime at 23:00 on 31 January.

But the MPs’ group running Parliament doubts this is feasible.

The House of Commons Commission estimates that getting the bell to ring during renovation works on the Palace of Westminster’s Elizabeth Tower, which houses Big Ben, would cost between £350,000 and £500,000.

It says this would involve bringing back the chiming mechanism and installing a temporary floor, and delays to the conservation work.

The commission argues the estimated costs could not be justified, and questions the idea that public donations should cover them.

But the campaign group Stand Up 4 Brexit’s “Big Ben must bong for Brexit” campaign had raised more than £200,000 on the GofFundMe website by Friday afternoon.

He queried whether the cost of getting the bell to ring again was really £500,000, adding that he believed officials had “deliberately inflated the figure” because “they don’t want to do it”.

“Don’t tell me it takes two weeks to attach a clapper to a bell,” he said.

Mr Francois also said he believed the prime minister should table a motion in the Commons on Monday to compel the Commons authorities to bong Big Ben.

He said Boris Johnson was the one who had “fired the starting gun” on the campaign by suggesting public donations during his BBC Breakfast interview on Tuesday.

However, Downing Street later said it was “a matter for the House” of Commons.