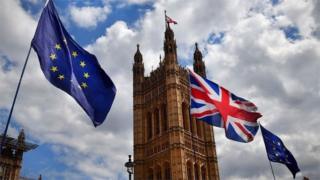 The UK’s controversial Brexit bill has passed its latest stage in Parliament after potential Conservative rebels backed a compromise with ministers.

The government promised to hand the Commons a say before it uses powers in the Internal Market Bill to override parts of the Brexit divorce deal.

The bill has prompted a row with the EU, which has threatened legal action unless sections are withdrawn.

MPs will vote on it again next week, before it goes to the House of Lords.

The bill would give the government powers to breach parts of the Brexit withdrawal agreement, which a minister has admitted would break international law.

It is designed to enable goods and services to flow freely across England, Scotland, Wales and Northern Ireland when the UK leaves the EU’s single market and customs union on 1 January – if talks with with the EU over arrangements to avoid a hard border on the island or Ireland break down.

The government argues these powers are a “safety net” in case the EU interprets the agreement in an “extreme and unreasonable” way.

But critics have warned the changes risk damaging the UK’s international standing.

Prime Minister Boris Johnson reached a deal over the bill with Conservative MPs last week, in a move to head off a potential rebellion.

The government amendment to the bill, which was backed by MPs, would prevent ministers using powers to override the Brexit withd