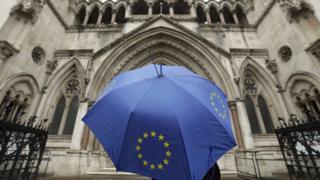 The PM’s spokesman said the Withdrawal Agreement Bill would expand this power to courts below the Supreme Court.

He added this would ensure judges at lower courts would not be “inadvertently” tied to the rulings “for years to come”.

But others warned the move would cause legal uncertainty.

MPs are set for an initial vote on the withdrawal bill on Friday, after the Conservatives won an 80-seat majority at last week’s general election.

Previous rulings of the European Court of Justice (ECJ) are set to be incorporated into the case law followed by British courts after Brexit.

The provision is contained in a separate EU withdrawal law passed in June last year under the premiership of Theresa May.

Previously, only the Supreme Court and the High Court of Justiciary in Scotland would be allowed to depart from these rulings.

Prime Minister Boris Johnson’s spokesman said enabling lower courts to do the same was an “important change” to ensure they do not face a “legal bottleneck”.

“We will take back control of our laws and disentangle ourselves from the EU’s legal order just as was promised to the British people,” he said.

There is no real detail in the government’s pledge – but it marks a potentially really significant development.

It means that UK civil courts below the Supreme Court, for example the Court of Appeal, High Court, county courts, and tribunals such as the Employment Appeal Tribunal could depart from ECJ rulings in areas such as workers’ rights.

Take for instance the right to paid holidays. The ECJ has interpreted this right more generously than the UK courts: for example, on the inclusion of overtime in holiday pay, and currently its interpretation binds the UK courts.

Following the 11 month transition period after Brexit, the way is open, for example, for an employer to take a case to one of the UK’s lower civil courts and invite a judge to apply a more restrictive interpretation to the right to paid holidays.

This would create plenty of work for lawyers, but it opens a can of worms and could affect many workers.