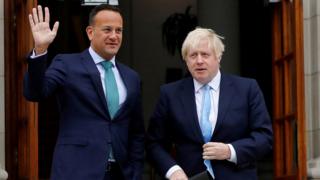 Downing Street said the meeting was to allow “detailed discussions” on the process of securing a deal.

Mr Johnson has said he remains “cautiously optimistic” about a deal.

But on Wednesday EU leaders accused the UK of putting forward untested ideas, adding that progress towards a new deal had been limited.

A similar sentiment was expressed on Tuesday by Mr Varadkar, who suggested it would be “very difficult” for the UK and the EU to reach a Brexit agreement before the 31 October deadline.

The meeting between the two leaders will take place in the north-west of England, with Mr Johnson still insisting the UK will leave the EU with or without a deal at the end of the month.

That is despite the so-called Benn Act – passed by MPs last month – demanding he request a delay to the Article 50 deadline from the EU until January 2020 if a deal has not been agreed before 19 October.

On Wednesday, Business Secretary Andrea Leadsom said the PM was gearing up to bypass legal obstacles to a no-deal Brexit by sending one letter requesting an extension and, in the same instance, submitting a second memo telling European leaders he does not want one.

Asked on ITV’s Peston programme whether the idea of sending two letters to the EU was a possible loophole, Ms Leadsom replied: “Absolutely.”