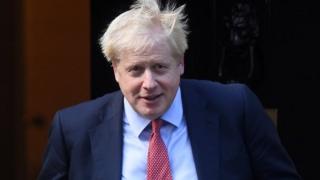 Boris Johnson has said he can see “a way forward” to reaching a deal with the EU in “all our interests” before Brexit is due to happen on 31 October.

But the prime minister warned the cabinet there was still a “significant amount of work” to do, as EU and UK officials continue to hold talks.

Parliament will meet on Saturday and vote on any deal achieved by Mr Johnson at a Brussels summit this week.

Labour said it would “wait and see” but would oppose anything “damaging”.

The European Commission echoed the prime minister, saying: “A lot of work remains to be done.”

SNP leader Nicola Sturgeon told the same programme: “We will not vote for the kind of deal specified by Boris Johnson.”

Talks in Brussels between UK and EU officials – described as “intense technical discussions” – continued on Sunday and will re-start on Monday.

House of Commons Leader Jacob Rees-Mogg, a leading Brexiteer, told Sky News that “compromise” would be inevitable during negotiations.

He added: “I trust Boris Johnson to ensure the relationship the United Kingdom has with the European Union is one where we are not a vassal state.”

Mr Rees-Mogg also said he might have to “eat my words” and support a plan close to the one put forward by former Prime Minister Theresa May, which MPs rejected three times.

Is there going to be a deal then?

Forgive me a politician’s answer, but the truth is nobody knows for sure. Not yet.

Both sides are being tight-lipped on the exact discussions happening behind closed doors in Brussels.

Indeed the cabinet was given very little detail about what exactly is being discussed.

Some might see that as a positive sign; nobody is going public on the concerns they have.

That doesn’t mean they don’t have them, but it suggests there is serious work going in to try to solve them.

I’m told Boris Johnson sounded genuinely confident in the cabinet conference call that a deal can be done.

Others in Westminster are filling up the coldest water they can find to pour all over reports a deal could be coming.

One opposition source told me they have war-gamed six potential outcomes for this mammoth political week.