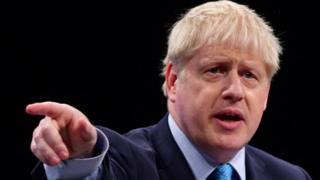 Boris Johnson is to set out his vision for a trade deal with the European Union, saying there is “no need” for the UK to follow Brussels’ rules.

The prime minister will use a speech in London later to call for a Canada-style free trade agreement – and threaten to walk away if one cannot be struck.

“There is no need for a free trade agreement to involve accepting EU rules,” he will say.

But the Irish PM said the UK needed to agree to a level playing field.

Leo Varadkar told the BBC on Sunday a Canada-style deal with the UK is possible – but that “Canada isn’t the UK” and there is a need for common rules and standards.

President of the European Commission Ursula von der Leyen has said negotiations will be “hard and fair and fast” but that the closer the UK wants to be to the bloc, the more of its common rules it will have to abide by.

EU chief negotiator Michel Barnier will also set out his approach to the talks on Monday.

Mr Johnson will use a speech on “unleashing Britain’s potential” to raise the prospect of the UK reverting to World Trade Organisation (WTO) terms if EU chiefs refuse to sign off on a Canada-style free trade agreement.

Canada’s deal with the EU means around 98% of all tariffs on the goods it trades with the bloc are duty free.

But a Canada-style deal would not include the UK’s dominant services sector – which accounts for more than 80% of UK jobs.

In his speech, the PM will say: “We have often been told that we must choose between full access to the EU market, along with accepting its rules and courts on the Norway model, or an ambitious free trade agreement, which opens up markets and avoids the full panoply of EU regulation, on the example of Canada.

“We have made our choice – we want a free trade agreement, similar to Canada’s but in the very unlikely event that we do not succeed, then our trade will have to be based on our existing Withdrawal Agreement with the EU.

“The choice is emphatically not ‘deal or no deal’. The question is whether we agree a trading relationship with the EU comparable to Canada’s – or more like Australia’s.

“In either case, I have no doubt that Britain will prosper.”

And he will reject the requirement for the UK to adopt Brussels-made rules “on competition policy,