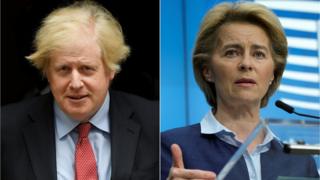 Both sides have said no major progress has been made towards a deal after four rounds of talks this year.

The PM is due to say the talks need to be “swiftly concluded” by autumn to provide certainty, ahead of the end of the transition period in December.

It comes after the EU accepted that the UK will not seek to extend this period.

During Monday’s high-level meeting via video conference call, Mr Johnson is expected to reiterate that the UK’s ambition is for a high quality free trade agreement consistent with others the EU have agreed.

He is also expected to make clear that the UK is ready to start trading on World Trade Organisation rules from 1 January if a deal cannot be reached.

And Cabinet Office minister Michael Gove and the UK’s chief negotiator David Frost will be with Mr Johnson.

It’s a familiar pattern – talks reach an impasse, things get stuck, the negotiators find themselves saying things and not necessarily listening to each other in a way that actually allows things to move forward.

Then the boss comes in, and gives it all a good kind of shove.

What Number 10 hopes is that now these talks will happen every week from the end of June until the end of July with formal negotiations and smaller group meetings, some even in person, to try to sort of get the chemistry of it going.

The question is, if and when they will actually compromise.

And the track record, which will be familiar, is that they both do compromise in the end, but only a much later stage.

There’s always two tracks to the timetable. On the one hand, there’s only six months left. That is not very much time at all to strike a very complicated detailed agreement.

Both sides have already agreed to an “intensified” series of weekly talks throughout July.

The UK government has said the talks will involve a mix of formal negotiating rounds and smaller group meetings in London and Brussels, if coronavirus guidelines allow.

But a French former Europe minister has said the EU is preparing itself for a no-deal Brexit.