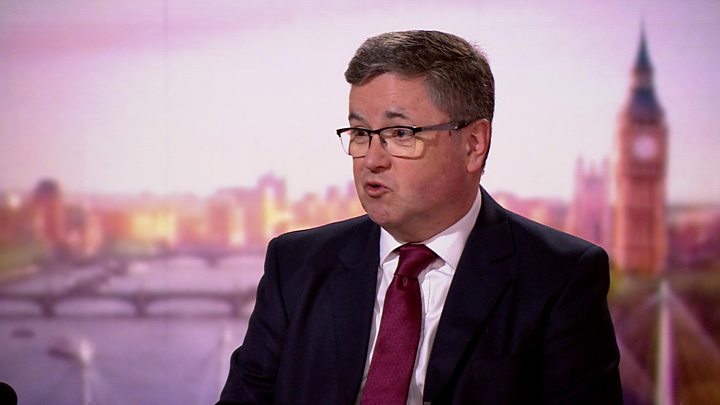 Media captionRobert Buckland: “If I see the rule of law being broken in a way that I find unacceptable then of course I will go”

He told the BBC he hoped powers being sought by ministers in the Internal Markets Bill would never be needed, as a solution could be found with the EU.

He said he would resign if the UK ended up breaking international law “in a way I find unacceptable”.

But he made clear he did “not believe we will get to that stage”.

Labour have indicated they will not support the proposed legislation – which MPs will debate for the first time on Monday – unless major changes are made to it.

Pressure is mounting on those Conservative MPs who are sceptical about the legislation to oppose it in the Commons as well, with former prime ministers Tony Blair and Sir John Major calling it “shaming and embarrassing”.

The EU’s chief negotiator, Michel Barnier, said the EU could not have been “clearer” when the two sides agreed the Brexit withdrawal agreement last year what the implications would be for Northern Ireland and the rest of the UK.

And Irish foreign affairs minister Simon Coveney said it was “completely bogus” for the UK to claim that the EU was now interpreting the Withdrawal Agreement in a way which could led to the break-up of the UK.

Boris Johnson says the European Union is threatening to impose a customs border in the Irish Sea, separating Northern Ireland from the rest of the UK.

If the Internal Markets Bill becomes law, it will give UK ministers powers to modify or “disapply” rules relating to the movement of goods between Britain and Northern Ireland and subsidies for Northern Irish companies. These rules are due to come into force from 1 January unless the UK and EU are able to strike a trade deal before then.

The proposed new legislation would change the terms of the so-called Northern Ireland Protocol, a crucial part of the legally-binding Withdrawal Agreement drawn up and agreed by both sides prior to the UK’s exit from the EU on 31 January.

‘Break the glass in an emergency’

Appearing on the BBC’s Andrew Marr, Mr Buckland said the government would only invoke the powers in the Bill if other solutions couldn’t be reached and if the EU went on to act in an “unreasonable”