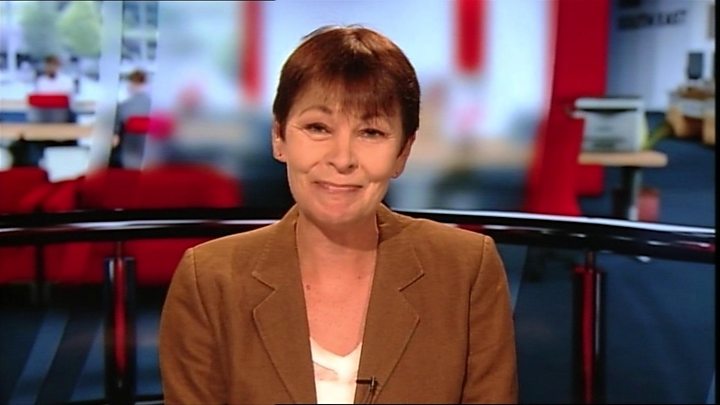 A Green Party MP has been criticised after suggesting an all-women “emergency cabinet” could meet to try to stop a no-deal Brexit.

Writing in the Guardian, Caroline Lucas said the cross-party group, formed of 10 female politicians, could “bring a different perspective”.

Ms Lucas said the cabinet could organise another EU referendum if the PM is defeated in a no-confidence vote.

Ms Lucas is a former leader of the Green Party, which supports holding another referendum on Brexit, at which it would campaign to remain in the EU.

In her article, she suggested MPs opposed to a no-deal Brexit should try to defeat Boris Johnson in a no-confidence vote, then replace him with a “national unity government”.

This arrangement – when a group of MPs from different parties choose to work together – has not been seen since the Second World War.

An all-female cabinet, she suggested, could then “press the pause button” and organise another referendum offering a choice between staying in the EU or the government’s Brexit plan, whether that is an agreed deal or no deal.

But her idea was criticised by International Trade Secretary Liz Truss, who tweeted: “Is there anything more sexist than claiming your gender determines your worldview/behaviour/attitude?”

Defending her proposal, Ms Lucas told BBC Radio 5 Live: “It is a generalisation and there are plenty of exceptions, but I would argue, generally and in my experience, women tend to be less tribal and tend to find it easier to establish trust more quickly.

“I simply want to see whether or not by bring women together the key women from across Westminster whether or not we could generate a new dynamic,” she added.

“We are facing a crisis. Time is running out.”

The others are: Heidi Allen, Kirsty Blackman, Yvette Cooper, Sylvia Hermon, and Anna Soubry. She has asked to meet the 10 women in the coming days.

On Monday, Ms Lucas told the BBC she had received responses from five of the women she has written to,