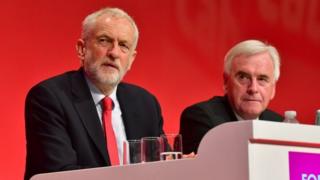 Labour officials close to Jeremy Corbyn are warning him to resist pressure to back a further Brexit referendum ahead of a general election.

These senior aides are concerned he is being pushed into a position which would delay a general election for some months by the shadow chancellor, John McDonnell, and other leading members of his shadow cabinet.

Behind the scenes, there is quite simply a major disagreement.

Senior Labour figures have been discussing how to respond if Boris Johnson presents a Brexit deal to Parliament this coming Saturday.

Some shadow cabinet members such as Ian Lavery and Jon Trickett would want the deal voted down, a vote of no confidence to follow swiftly, and an alternative administration put in place to ask for a Brexit extension and call an election.

But another powerful group – including Mr McDonnell and deputy leader Tom Watson – are pressing for a referendum ahead of a general election.

One possibility would be to seek to amend a Boris Johnson deal to make it subject to a public vote.

But in correspondence seen by the BBC, some of Mr Corbyn’s closest advisers are warning against taking this route.

First, they believe a referendum will not gain enough votes in the House of Commons so the Labour leader will be seen to have failed in pushing for one.

Second, he risks being portrayed as trying to duck out of a general election – which will then be used against him by his opponents when the election does eventually come.

And third, even if successful, there would be no electoral mandate for a new referendum in any case.