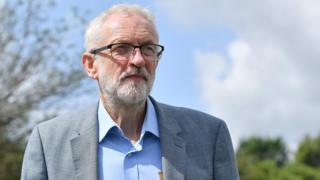 Jeremy Corbyn has urged the leaders of the other opposition parties and Tory rebels to install him as caretaker PM in order to stop a no-deal Brexit.

If he wins a no-confidence vote in the government, the Labour leader plans to delay Brexit, call a snap election and campaign for another referendum.

Mr Corbyn outlined his plan in a letter, saying the caretaker government would be “strictly time-limited”.

Downing Street said Mr Corbyn would “overrule the referendum and wreck the economy” if he became prime minister.

Prime Minister Boris Johnson said he wants a deal with the European Union, but insists the UK must leave the bloc by 31 October “do or die”.

Mr Corbyn said he would seek to call a no-confidence vote at the “earliest opportunity when we can be confident of success”.

To defeat the government he would have to secure the backing of a majority of MPs.

“Following a successful vote of no confidence in the government, I would then, as Leader of the Opposition, seek the confidence of the House for a strictly time-limited temporary government with the aim of calling a general election, and securing the necessary extension of Article 50 to do so.”

If he were to succeed in calling a general election – which would require the support of two-thirds of MPs – Labour would campaign for a second referendum with the option to remain in the EU, he said.

How have the party leaders responded?