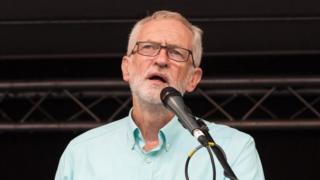 Jeremy Corbyn has asked the cabinet secretary to rule on whether Boris Johnson could force through a no-deal Brexit in a general election period.

There have been reports the PM could call an election that would be held after the 31 October Brexit deadline – the day the UK is due to leave the EU.

The Labour leader has written to Sir Mark Sedwill saying such a move would be an “anti-democratic abuse of power”.

It comes amid speculation MPs will table a no-confidence motion in the PM.

It is thought opposition MPs could propose the vote in a bid to prevent the UK leaving the EU with no deal.

The UK will leave the EU on 31 October with or without a deal unless Article 50 is extended or revoked.

Mr Corbyn said the party would propose the vote at an “appropriate” time after the Commons returns from its summer recess on 5 September.

What happens if the PM loses?

If the PM loses the motion of no-confidence, then under the Fixed Term Parliaments Act he would have another 14 days to win another vote.

If he fails to secure the vote then a general election would be called on a date advised on by the PM.

However, if another candidate can secure the confidence of the Commons then, under cabinet rules, Mr Johnson would be expected to resign and recommend the Queen appoints the other person.

What does the government say?

But according to the Sunday Telegraph, Dominic Cummings, the PM’s senior adviser at No 10, told MPs that, even if Mr Johnson lost a no-confidence vote, it would not prevent him taking the UK out of the EU by the agreed deadline.

He is reported to have said the PM could call an election to fall after 31 October, by which time Britain would be out of the EU.

Brexiteers say Britain’s departure from the EU is already set, with Parliament having voted to leave, to trigger Article 50 and to pass legislation to set a deadline of 31 October.

In his letter to Sir Mark, Mr Corbyn called such a move “unprecedented” and “unconstitutional”.

He referred to the Cabinet Office’s election “purdah”