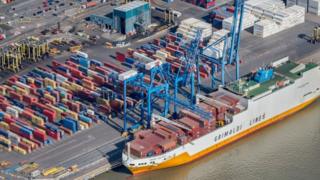 The central element in the Conservatives’ election pitch is a commitment to “get Brexit done”.

Boris Johnson’s Withdrawal Agreement with the EU would indeed end the UK’s membership.

But it would leave some very important Brexit-related challenges still to do, including the UK’s future trade relationship with the bloc, and with the rest of the world.

Some people are worried that we might face a new “cliff-edge” at the end of 2020.

Under Mr Johnson’s Withdrawal Agreement, the existing arrangements between the EU and UK would temporarily continue, with goods and services being allowed to flow freely across the various borders with the continent.

If Boris Johnson wins a majority he says he would negotiate a Free Trade Agreement (FTA) with the EU ready to go into operation at the end of 2020.

An FTA is an agreement between two countries which eliminates trade taxes, known as tariffs, with the aim of making business and commerce run more smoothly. FTAs often also include measures to reduce other types of regulatory barriers that make trade more difficult.

Is there enough time to negotiate a trade deal?

The aim is to have a deal done in time for the end of 2020. That is a very challenging timetable.

Trade negotiations tend to take several years to complete. They are technically challenging and politically contentious. Both those features can make them drag on.

To take one example, the EU’s deal with Canada took more than five years for negotiators to complete and another three before it came into force, on a provisional basis.

The UK-EU negotiation will be unusual in that it is intended to establish a trade relationship that is less integrated than what the two sides have now.

Usually, trade negotiations make for closer commercial relations, so past experience isn’t necessarily a good guide to the likely timetable.

Some people say that because we are already fully aligned with the EU the negotiation will be easy and quick.

But for many Brexit supporters the freedom to depart from EU rules is one of the main prizes. How much we depart – on food standards for example – will be important for the EU in judging what restrictions to impose on British goods. That could be a time-consuming process.

Image copyright Getty Images Image caption Trade deals with the US have run into trouble over issues such as chlorine treated chicken
Could we extend the current arrangements beyond December 2020?