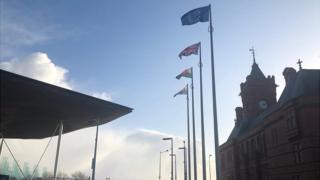 Image caption EU flags at the National Assembly will be lowered at 23:00 GMT on Friday

Welsh politicians will mark the UK’s final day in the European Union later.

Flags will be lowered at the National Assembly in Cardiff Bay and Welsh Government buildings at 23:00 GMT – the moment the UK formally leaves.

In a speech in Cardiff First Minister Mark Drakeford will say Wales’ European identity will become more important after Brexit.

Mr Hart will take part in a cabinet meeting in Sunderland, the first city to back Leave as the referendum votes were counted in June 2016.

“This is not an end, but a beginning,” Prime Minister Boris Johnson is expected to say in a speech on Friday evening.

The National Assembly’s EU flags, which stand outside the Senedd and Ty Hywel buildings in Cardiff Bay, will be replaced with Welsh flags.

Mark Drakeford, who is Welsh Labour leader as well as first minister, will deliver a speech in Cardiff later on Wales’ future relationship with Europe.

“Today is a day for looking forward, not back,” he will say.

“We leave the European Union tonight. But Wales’ European identity continues. We will be a European nation so long as Wales exists.

“Wales remains a European nation and after 11pm tonight that identity becomes more important, not less.”

While the UK will leave the EU’s political systems on Friday night, it will enter a transition period where the country sticks to European Union rules.

This runs to the end of the year, during which time the UK government holds negotiations on a future trading relationship with the EU.

Mr Hart said: “Today marks a new chapter in our history as we finally deliver on the decision made by the Welsh people and leave the EU.

“We are leaving as one United Kingdom with a mission to build better infrastructure, make our streets safer, clean up our environment and make our union stronger.”

Andrew RT Davies was a prominent figure in the 2016 Welsh Vote Leave campaign, when he was serving as Welsh Conservative assembly group leader.

Mr Davies said: “It’s now incumbent on politicians of all colours to put the rancour and division of the past three years behind us and put our shoulder to the wheel to deliver a brighter future for Wales and the United Kingdom.”