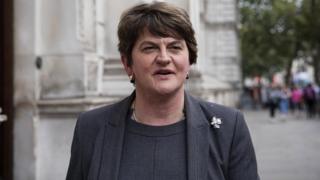 The DUP leader has refuted reports in the Times that the party is prepared to abide by some European rules after Brexit.

The newspaper said the DUP had agreed “to shift its red lines” as part of a new deal to replace the backstop.

It added the party had said privately that it would drop its objections to regulatory checks in the Irish Sea.

Arlene Foster tweeted the “UK must leave as one nation” and “anonymous sources lead to nonsense stories”.

Mrs Foster said the party would “not support any arrangements that create a barrier to east west trade”. 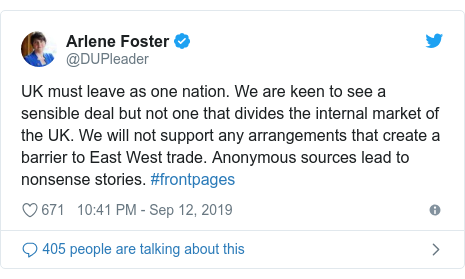 DUP Brexit spokesperson Sammy Wilson told the BBC’s Good Morning Ulster programme that the story “goes against all of what has been said in recent days” and dismissed it as “bad journalism”.

He said the DUP had already said certain European regulations which “are essential to the operation of industry in Northern Ireland and which don’t impact with our relationship with our main market in Great Britain” may be acceptable, if they were considered by the Northern Ireland Assembly.

“But that’s totally different from saying that you hand to the EU your rights in the future to make rules and regulations which apply to Northern Ireland which would then be subject to decisions by European Court of Justice and would require checks between Northern Ireland and Great Britain,” he added.

The backstop is the insurance policy to avoid a hard border between Northern Ireland and the Republic of Ireland after Brexit, unless and until another solution is found.

Westminster MPs rejected the backstop and withdrawal agreement negotiated by ex-PM Theresa May, which would have kept all of the UK in a “temporary customs territory” with the EU and would have seen Northern Ireland also continuing to follow other EU rules.

The Democratic Unionists (DUP) had opposed it, saying it would create a border down the Irish Sea and risk the future of the union.

On Thursday, the head of the European Parliament has said he is willing to revisit the proposal of a Northern Ireland-only backstop to break the Brexit deadlock.