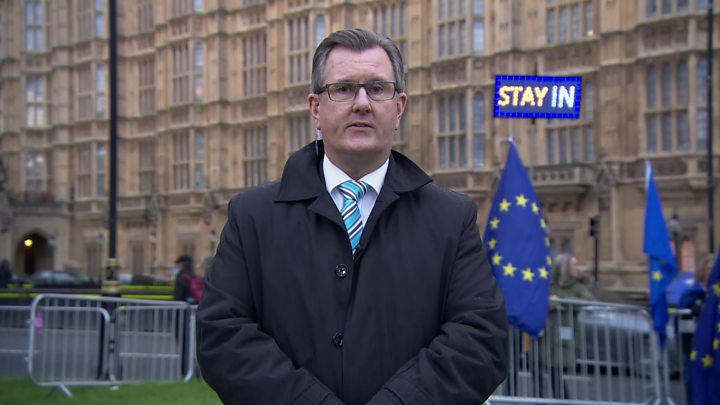 The DUP has held out the prospect of supporting a customs union as talks continue between Theresa May and Jeremy Corbyn to break the Brexit deadlock.

Sir Jeffrey Donaldson made the suggestion to BBC News NI on Wednesday evening.

It came as the Tory and Labour leaders agreed a “programme of work” to try to find a way forward to put to MPs.

On Wednesday evening, Sir Jeffrey told BBC Newsline: “We would have preferred a form of Brexit that enables the UK to negotiate new trade agreements with other countries.

“That’s part of the reason for Brexit and maybe a customs union might be a temporary staging post towards that objective.

The DUP MP earlier told BBC Radio Ulster that regardless of what emerges in the coming days, the DUP’s stance on the union was “un-persuadable” and they remained in an “influential position” because of the government’s fragile working majority in Parliament.

MPs have been debating legislation which would require Mrs May to seek an extension to Article 50 and give the Commons the power to approve or amend whatever was agreed.