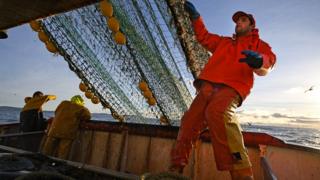 There is “a lot of uncertainty” about the UK’s capacity to patrol fishing waters after a no-deal Brexit, a memo from a government department mistakenly emailed to the BBC says.

The note says there are just 12 ships “to monitor a space three times the size of the surface area of the UK”.

The memo from the Department for the Environment, Food and Rural Affairs was discussing media stories.

But ministers said they are confident security will be enforced after Brexit.

The UK is due to leave the EU on 31 October. A “divorce” deal – which sets out how the UK leaves – has not been agreed and Prime Minister Boris Johnson has pledged to leave whether one is reached or not.

In the event of leaving without a deal, the UK would become an independent coastal state and leave the Common Fisheries Policy, which is the EU’s shared rules about how much fish countries can catch and where.

‘Not an overly strong footing’

Defra’s internal email mentioned a number of media stories, including one being worked on by a freelance journalist for the Independent.

According to the memo, the story planned to look at the preparation being made to deter EU fishermen from UK waters in the case of a no-deal Brexit, and also whether the UK will enforce the exclusion of foreign vessels.

The note reads: “While our public position on this wider issue is already clear and widely communicated, in that post-Brexit we will be an independent coastal state with control of our waters, both policy and MoD have indicated we are not on an overly strong footing to get ahead of the potential claims that could arise from this story.

“At this stage, there is a lot of uncertainty about the sufficiency of enforcement in a no-deal because we have 12 vessels that need to monitor a space three times the size of the surface area of the UK.”

Admiral Lord West, a Labour peer and former First Sea Lord, said the email appeared to show the UK has “insufficient assets to patrol and look after our exclusive economic zone for fisheries and also our territorial seas.

“This will be thrown into stark relief if we should cease to have an agreement with the EU on fisheries.”

He added: “This is something a number of us have been saying for some time now but it has always been denied by Defra and the government.”