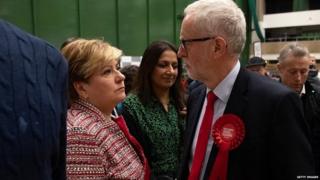 Emily Thornberry warned privately in September that Labour’s election chances would be hampered by taking a neutral position on Brexit.

Speaking at the party’s conference, for a BBC film being broadcast on Tuesday, she said she was worried about Jeremy Corbyn saying he “didn’t have a view” on the biggest decision facing the UK.

She was “really pushing” at the time for Labour to openly back Remain.

Labour’s defeat has led to a bitter internal row over its Brexit policy.

Some Labour candidates who lost their seats have blamed the party’s offer of another referendum for their defeat alongside doubts about Jeremy Corbyn’s leadership.

Ms Thornberry, the re-elected MP for Islington South who is expected to be a candidate in the contest to succeed Mr Corbyn, revealed on Monday that she had begun legal action against a former colleague who claimed the shadow foreign secretary called some Leave voters “stupid”.

She said Caroline Flint’s claim she had told an MP from a Leave-voting area “I am glad my constituents aren’t as stupid as yours” was “a complete lie”. But Ms Flint, who lost her seat at the election, has stood by her remarks.

Labour went into the election offering another Brexit referendum on a new withdrawal deal it hoped to negotiate if it won power.

At its conference in Brighton, the leadership saw off an attempt by party members to force it to campaign to remain in the EU.

During the campaign, Mr Corbyn went further by saying that he personally would not take sides in any future public vote, saying this would make it easier for him to implement whatever choice the people made.

While Ms Thornberry has never hidden her view that she thinks Brexit is a mistake, an interview she gave to the BBC’s political editor Laura Kuenssberg during the conference makes clear the extent of her doubts.

In the documentary, entitled The Brexit Storm Continues, she warned that a neutral position on Brexit would be politically dangerous.

She also revealed she had privately urged the leadership to take a much more overt pro-Remain stance.