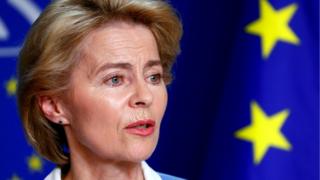 The deadline for negotiating the UK’s future relationship with the EU may need to be extended, the European Commission president has said.

Boris Johnson has said the post-Brexit transition period will not be extended beyond 31 December 2020.

But Ursula von der Leyen told French newspaper Les Echos both sides needed to think seriously about whether this was enough time to reach an agreement.

She said she was “very worried” about how little time was available.

“It would be reasonable to evaluate the situation mid-year and then, if necessary, agree on extending the transition period,” she told the paper.

Last week MPs backed Mr Johnson’s plan for the UK to leave the EU on 31 January, which included a new clause prohibiting the government from extending the transition period beyond the end of 2020.

During this 11-month period, the UK will cease to be an EU member but its trading relationship will remain the same and it will continue to follow the EU’s rules, such as accepting rulings from the European Court of Justice. It will also continue to contribute to the EU’s budget.

The UK will use the time to negotiate a free trade deal as well as other aspects of its future relationship with the EU, including law enforcement, security and access to fishing waters.

Earlier this month, Ms von der Leyen said the timeframe was “extremely short” to discuss not only trade, but also other issues.

If negotiators fail to agree a trade deal by the deadline and no extension is agreed, this would leave the UK trading on World Trade Organization (WTO) terms with the EU, with the likelihood of tariffs on imports and exports.

If other aspects of the future relationship are not ready, they too would have to proceed on no-deal terms.

The Commission drafts EU laws, enforces EU rules and has the power to impose fines on member states if necessary.

Meanwhile, the Times reports that the European Commission will warn Britain that access from the City of London t