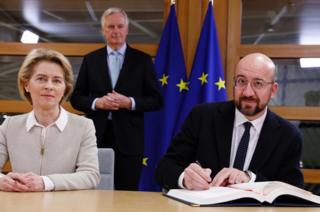 Image copyright PA Media Image caption A historic moment for the EU: Signing off on the UK’s exit

The heads of the European Commission and Council – Ursula von der Leyen and Charles Michel – have signed the Withdrawal Agreement, ahead of the UK’s exit from the EU on 31 January.

The Queen approved it on Thursday, and next Wednesday the European Parliament is expected to vote for it too.

The UK has agreed to abide by EU rules during a transition period until the end of the year. By 2021 the UK aims to have agreed a deal on future ties.

The document is now on its way to Downing Street for signing by UK Prime Minister Boris Johnson.

Mrs von der Leyen and other senior EU figures are sceptical about the UK government’s plan to negotiate a comprehensive deal on future relations before the end of 2020. They believe the timetable for that is too tight.

But Prime Minister Boris Johnson is upbeat, insisting the UK can now move forward after years of wrangling over Brexit.

Charles Michel, the former Belgian Prime Minister who chairs EU summits, said in a tweet “things will inevitably change but our friendship will remain.

“We start a new chapter as partners and allies.”

.@eucopresident Charles Michel and I have just signed the Agreement on the Withdrawal of the UK from the EU, opening the way for its ratification by the European Parliament. pic.twitter.com/rEqnUnJA2E

Earlier Mr Johnson said “at times it felt like we would never cross the Brexit finish line, but we’ve done it.

“Now we can put the rancour and division of the past three years behind us and focus on delivering a bright, exciting future – with better hospital