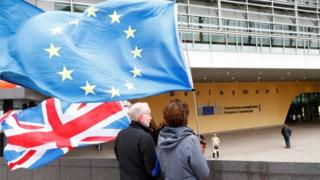 EU ministers meeting in Luxembourg are to receive an update on Brexit talks from the bloc’s chief negotiator, Michel Barnier, later.

Discussions between EU and UK officials aimed at reaching a Brexit deal have intensified in recent days.

Hopes of a deal being agreed before the 31 October Brexit deadline were boosted after a meeting between Boris Johnson and his Irish counterpart last week.

But Mr Barnier this week said “big gaps” remained between the UK and EU.

Finland’s prime minister, Antti Rinne, who holds the EU’s rotating presidency, went further, saying there was not enough time for a deal to be reached.

After meeting the European Council’s president-elect Charles Michel, Mr Rinne said: “I think there is no time in a practical or legal way to find an agreement before the EU Council meeting. We need more time.”

In response, housing secretary Robert Jenrick rejected the remarks, stressing a “great deal” of progress had been made and negotiators are working “very intensively”.

He told BBC’s Newsnight: “The EU is capable of moving extremely quickly if they wish to.

“Like any negotiation with the EU, and in fact with any major negotiation in life, everything happens at the last minute.

“This was always going to be both complicated and come down to the final hours and days, so this doesn’t surprise me. We are going to work round the clock to try to secure it.”

The comments came as negotiators stepped up efforts to work out a way to break the deadlock over the Irish backstop, the contingency measure to prevent a hard border on the island of Ireland that is seen as the key factor in the talks.

On Monday, Irish deputy premier Simon Coveney raised hopes on an agreement being reached before the EU summit by saying a deal could possibly be achieved as soon as this week.

In similar comments, Mr Johnson told senior ministers there was “still a significant amount of work to get there” but a “pathway” to a deal was still visible.

With talks in Brussels ongoing, a Cabinet meeting expected to take place on Tuesday has been postponed and is now likely to take place on Wednesday. Downing Street sources say it is to allow for a fuller update on Brexit.

It’s extremely hard to see how a new Brexit deal can still be agreed by this Thursday.