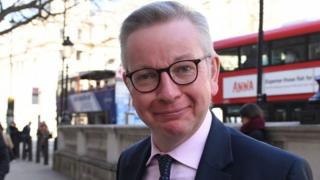 A post-Brexit meeting between the EU and UK will go ahead as planned next week, despite the coronavirus crisis.

Much of Europe is on lockdown, so Cabinet Office minister Michael Gove will meet EU officials via video link.

The UK and EU’s chief negotiators, David Frost and Michel Barnier are in self-isolation after testing positive for coronavirus.

Downing Street insisted there would be “no change” to its timetable for getting a trade deal done.

Under the terms of its withdrawal agreement with the EU, the UK has until the end of the year – during which it will continue to follow most Brussels rules – to reach a deal.

The UK has ruled out any deadline extension. But European Commission President Ursula von der Leyen has warned it will be “impossible” to reach a comprehensive deal within that timescale.

Speaking last month, Mr Gove threatened that the UK could walk away from talks in June if the two sides had not agreed the “broad outline” of terms by then.

The government also published a 30-page document outlining its priorities for negotiations,

The first meeting of the joint UK-EU committee, to discuss the implementation of the withdrawal agreement, is due to take place by video conference on Monday, with Mr Gove facing European Commission Vice-President Maros Sefcovic.

A spokesman for Prime M