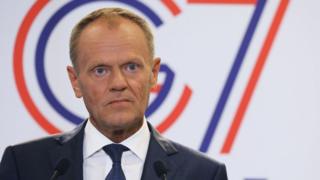 European Council President Donald Tusk has said the EU is “willing to listen” to Prime Minister Boris Johnson’s ideas for Brexit if they are “realistic”.

But speaking at the G7 summit in Biarritz, France, Mr Tusk said he would “not co-operate on [a] no-deal”.

Mr Johnson said that if Mr Tusk – who he will meet on Sunday – did not want to be remembered as “Mr No-Deal Brexit”, then UK demands must be met.

Since becoming PM, Mr Johnson has said the UK will leave the EU on 31 October.

Mr Johnson has repeatedly stated he would prefer to leave the EU with a deal, but insists the backstop – the insurance policy designed to avoid a hard border on the island of Ireland – must be removed from the withdrawal agreement.

“I’ve made it absolutely clear I don’t want no deal and that we’ve got to get rid of the backstop from the treaty and if Mr Tusk doesn’t want to go down as Mr No-Deal Brexit I hope that point will be borne in mind too,” he said.

Earlier in the day, Mr Tusk had used the same moniker when talking about Mr Johnson.

“I still hope Prime Minister Johnson will not like to go down in history as Mr No Deal,” he said.

“The EU has always been open to co-operation. One thing I will not co-operate on is a no deal.

“We are willing to listen to ideas that are operational, realistic and acceptable to all EU member states.”

The G7 summit – a get-together of most of the leaders of the world’s largest economies – comes with just over two months until the UK is scheduled to leave the EU at the end of October.

Mr Johnson wants to renegotiate the Irish backstop – a key Brexit sticking point – but the EU has consistently ruled this out.

If implemented, the backstop – a last resort should the UK and the EU not agree a trade deal after Brexit – would see Northern Ireland staying aligned to some rules of the EU single market.