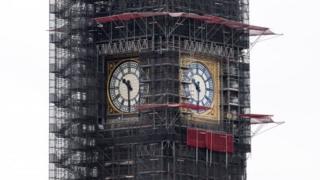 The famous bell has only rung a few times since renovations began in 2017.

But the Brexit Party’s Richard Tice said it would be “pretty feeble if we can’t organise for a bell to chime at this historic moment”.

StandUp4Brexit, the organisation behind the crowdfunder, says if it does not reach the target, the money will be donated to the Help For Heroes charity.

More than £90,000 had been raised by Thursday lunchtime, with one of the largest single contributions coming from Conservative MP Mark Francois, who donated £1,000.

Appealing for contributions, the group writes: “However you may have voted in the referendum, this unique moment is unlikely ever to be repeated…

“If you would like to see it marked by the chiming of the most iconic timepiece in the world, please donate now.”

The House of Commons Commission has estimated that getting the bell to ring during renovation works on the Palace of Westminster’s Elizabeth Tower, which houses it, would cost between £350,000 and £500,000.

The body – a group of MPs and officials responsible for the day-to-day running of Parliament – said this was because of the costs of bringing back the chiming mechanism and installing a temporary floor, and delays to the conservation work.

On Wednesday the commission said the estimated costs could not be justified, and appeared to cast doubt on the idea that public donations should cover them.

In a statement, the body said using donations for the works would be an “unprecedented approach”.

“Any novel form of funding would need to be consistent with principles of propriety and proper oversight of public expenditure,” it added.

On Thursday the PM’s spokesman said: “The House of Commons authorities have set out that there may be potential difficulties in accepting money from public donations.

“I think the PM’s focus is on the events which he and the government are planning to mark 31 January. It’s a significant moment in our history and we want to ensure that’s prop