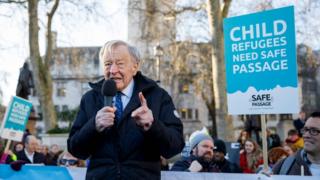 The government has lost another vote in the House of Lords over its Brexit legislation – this time on the issue of child refugees.

Peers supported Lord Dubs’ amendment to protect the rights of refugee children to join their families in the UK after Brexit.

The government insisted it was “intent” on protecting family reunification.

It will try to reverse the change – and others voted for on Monday – when the bill returns to the Commons.

With an 80-strong majority of MPs, the government is likely to get its way.

The Brexit bill – officially called the EU (Withdrawal Agreement) Bill – ensures the UK leaves the EU on 31 January with a deal.

It was approved by MPs without amendment but has faced a tougher battle in the House of Lords.

And ministers have now suffered a fourth defeat with the House of Lords voting 300 votes to 220 to support a change on child refugees.

What is the amendment about?

A previous version of the Brexit bill required the government to seek agreement with the EU to ensure that unaccompanied children could come to the UK to join a relative.

However, following Boris Johnson’s election victory, this guarantee was weakened, instead only requiring the government to make statements to Parliament on the subject after Brexit.

Lord Dubs – who came to the UK as a child to escape the Nazis – put down the amendment seeking to reinsert the original commitment.

Speaking during the debate, he urged the government not to “close the door” on refugee children, arguing that offering a safe, legal route into the UK would “thwart the traffickers”.