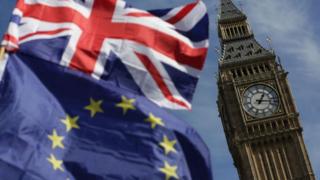 The government is to spend up to £355m on a new system for moving goods into Northern Ireland from the rest of the UK.

The system is required as a consequence of the NI part of the Brexit deal.

The Trader Support Service (TSS) will effectively see the government acting as a customs agent on behalf of businesses.

The TSS is due to be up and running in September and will be free to use.

Initially traders will register with the service and receive advice on what Brexit will mean for their business and the next steps they should take.

They will be helped to understand what information they need to collect about the goods they will be importing.

TSS will then use this information to complete import declarations on behalf of importing companies.

It should help to prevent what would have been a significant new administrative burden for many firms.

Mr Lewis said: “It is a unique service that will ensure that businesses of all sizes can have import processes dealt with on their behalf, at no cost.”

However it does not remove all the looming difficulties for GB-NI trade.

For example agri-food products being imported from GB will have to go through an expensive certification process unless a special deal can be reached with the EU.

In its negotiation with EU, the UK government has suggested a ‘trusted trader’ system for supermarkets when moving their products from GB to NI.

Northern Ireland manufacturers import much of their components and raw materials from GB and have welcomed the TSS plan.

Stephen Kelly, from Manufacturing NI, said: “This commitment to cover customs costs is a very welcome first step but there is more still to be done.”

He cited the agri-food issue and VAT as areas where more clarity was needed.

“It remains the case that agreement on the future relationship between the UK and EU will remove many potential existential issues so we hope that there is an increased focus on ensuring success in those negotiation for all our sakes.”