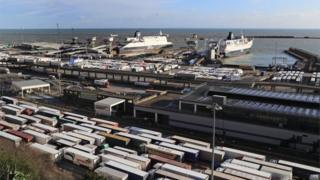 The Road Haulage Association has described its meeting with Michael Gove about post-Brexit arrangements as “a washout”.

The body said there had been “no clarity” from the senior minister on how border checks will operate when the transition period ends after December.

Although the UK has left the EU, it has continued following some EU rules during the transition period.

A Cabinet Office spokesperson said the meeting had been “constructive”.

After the transition period traders will need to fill in customs declaration forms, with detailed information on what is being imported and exported.

The haulage industry has expressed concern this could lead to long tailbacks at ports and disruption to supply chains.

In Kent a coronavirus testing centre has been closed to make way for a lorry park to accommodate post-Brexit customs checks.

And earlier this week Logistics UK warned that a new freight management system – designed to reduce delays at ports – will not be ready when the transition period ends.

A meeting between the government and stakeholders was arranged to discuss industry concerns but Road Haulage Association chief executive Richard Burnett said that it “fell far short of our expectations”.

“The mutually effective co-operation we wanted to ensure seamless border crossings just didn’t happen and there is still no clarity over the questions that we have raised,” he said.

“Although I don’t think we’re quite back at square one, we’re certainly not much further ahead.”

Chief executive of the Cold Chain Federation Shane Brennan who also attended the meeting said: “There is no point pretending it’s going to be smooth – we are heading for major delays and disruption – systems are not ready, processes are unclear, awareness of what will be required is low across industry

“We will need calm heads and a willingness from customs, food and security officials (on the U.K. and EU side) to make sensible, prag