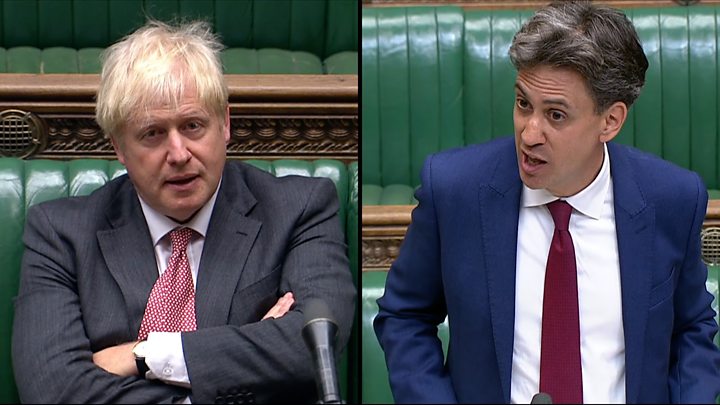 Media captionMiliband to Johnson: “He hasn’t read the bill”

A proposed law giving Boris Johnson’s government the power to override parts of the Brexit agreement with the EU has passed its first hurdle in the Commons.

Ministers say it contains vital safeguards to protect Northern Ireland and the rest of the UK, if negotiations on a future trade deal break down.

But critics, including a number of Tory MPs, warned it risks damaging the UK by breaching international law.

Although the government has a majority of 80 in the Commons, it is braced for rebellions in the coming weeks as the legislation receives detailed scrutiny.

Several prominent Conservatives, including former Chancellor Sajid Javid, have said they could not support the final bill unless it is amended, with a number expected to have abstained in Monday’s vote.

Sir Roger Gale, the Tory MP for North Thanet in Kent, told the BBC’s Newsnight he had voted against the bill as a “matter of principle” to uphold international law.

“I think that this is damaging our international reputation for honest and straight-dealing at a time when we are about to embark on a series of trade negotiations. I took a view that you fight this tooth and nail at every step.”

He suggested other colleagues were “holding their fire” until later in the bill’s passage, with a group led by ex-minister Sir Bob Neill pressing for a “parliamentary lock” on the government’s ability to exercise the powers.

“I’m not remotely surprised that I am a tiny minority. I think that may change next Tuesday,” he added.

The bill is designed to enable goods and services to flow freely across England, Scotland, Wales and Northern Ireland when the UK leaves the EU’s single market and customs union on 1 January.

But, controversially, it gives the government the power to change aspects of the EU withdrawal agreement, a legally-binding deal governing the terms of the UK’s exit from the EU earlier this year.

Ministers say this is a failsafe mechanism in case the EU interprets the agreement, in particular the Northern Ireland Protocol designed to avoid a hard border on the island of Ireland, in an “extreme and unreasonable” way.

Boris Johnson’s government has a hefty majority. It was never going to lose Monday night’s vote in the Commons.

Downing Street calculates that most of the public won’t pay that much attention to yet more Westminster argy-bargy about the Brexit process.