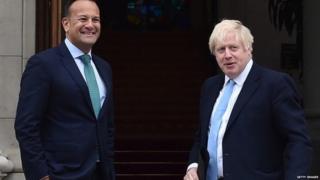 It will be “very difficult” for the UK and the EU to reach a Brexit agreement before the 31 October deadline, Irish leader Leo Varadkar has said.

Amid claims on Tuesday that talks were close to collapse, he also suggested the language around the discussions had turned toxic “in some quarters”.

Mr Varadkar and Boris Johnson are expected to meet for further Brexit talks later this week.

The UK has said the EU needs to “move quickly” to stop it leaving without an agreement at the end of the month.

Taoiseach Leo Varadkar, who spoke with Mr Johnson by phone for about 45 minutes on Tuesday, said he would strive until the “last moment” to reach a deal with the UK, but “not at any cost” to his country, Northern Ireland and the rest of Europe.

He also downplayed the chances of any agreement being struck before the crucial summit of EU leaders on 17 October, during which next steps for Brexit are likely to be decided.

“I think it’s going to be very difficult to secure an agreement by next week, quite frankly,” Mr Varadkar said.

“Essentially, what the UK has done is repudiated the deal that we negotiated in good faith with prime minister [Theresa] May’s government over two years and have sort of put half of that now back on the table, and are saying that’s a concession. And of course it isn’t really.”

Mr Varadkar added that it was his job to hold the UK to commitments it had made since the 2016 referendum to prevent a hard border on the island of Ireland and uphold the Good Friday Agreement.

The Irish leader’s comments came after a No 10 source claimed on Tuesday that Germany was now making it “essentially impossible” for the UK to leave the EU with a deal.

That assessment followed a “frank” phone call between Boris Johnson and German Chancellor Angela Merkel, during which they discussed Brexit proposals the UK prime minister put forward last week to the EU.

After the call, a No 10 source said Mrs Merkel had made clear a deal based on the prime minister’s plans was “overwhelmingly unlikely”