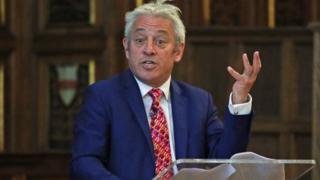 John Bercow has warned Boris Johnson against disobeying the law designed to stop a no-deal Brexit, saying Parliament would thwart that.

In a speech, the Speaker said the only possible Brexit was one backed by MPs.

A new law, passed before the suspension of Parliament, forces the PM to seek a delay until 31 January 2020, unless a deal or no-deal exit is approved by MPs by 19 October.

The PM has said he would rather be “dead in a ditch” than ask for a delay.

The law received royal assent on Monday, the final day that MPs sat in this session.

Parliament was prorogued for five weeks in the early hours of Tuesday.

The UK is due to leave the EU on 31 October, but the new law passed by MPs could extend that deadline.

Delivering a lecture in London, Mr Bercow said: “Not obeying the law must surely be a non-starter. Period.”

He said it would be a “terrible example to set to the rest of society”.

“The only form of Brexit which we will have, whenever that might be, will be a Brexit that the House of Commons has explicitly endorsed,” he said.

“Surely, in 2019, in modern Britain, in a parliamentary democracy, we – parliamentarians, legislators – cannot in all conscience be conducting a debate as to whether adherence to the law is or isn’t required.”

He called it “astonishing” that “anyone has even entertained the notion”.

He also compared any attempt to shun the law over the extension of Article 50 – the process by which the UK leaves the EU – with a bank robber excusing their crime by giving their stolen cash to charity.

“One should no more refuse to request an extension of Article 50 because of what one might regard as the noble end of departing from the EU as soon as possible, than one could possibly excuse robbing a bank on the basis that the cash stolen would be