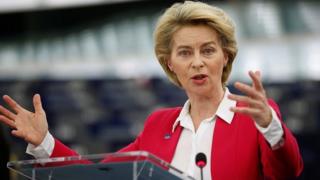 Boris Johnson will stress the importance of the UK and EU reaching a trade deal by the end of the year in his first meeting with the new president of the European Commission.

The PM will hold talks with Ursula von der Leyen in Downing Street.

Once the UK leaves the EU on 31 January, the two sides will begin talks on their future economic relationship.

Mr Johnson has insisted a deal is possible by the end of 2020 and the process will not be extended.

After its 31 January exit, the UK will enter into an 11-month transition period in which it will largely follow EU rules but will not have any representation in the bloc’s institutions. This period will come to an end on 31 December 2020.

Earlier in the Commons, the government rejected calls from Labour and the Lib Dems for Parliament to be given a vote on extending the transition period, if necessary, this summer to allow more time for negotiations.

Opposition MPs have warned that trade deals typically take years to conclude and, with relatively little time available, the UK risks defaulting to World Trade Organisation rules at the start of 2021, potentially leading to damaging tariffs for some industries.

But No 10 said Mr Johnson was expected to tell the EU president that he is confident of getting a deal and, having waited for more than three years to leave the EU, both British and EU citizens expect the next phase of trade negotiations to conclude on time.