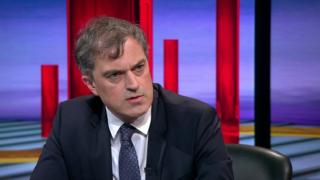 The NI secretary has said there will not be a situation where “one community has a veto” over Brexit plans.

Julian Smith was responding to concern from some NI parties that the prime minister’s Brexit proposals could give the DUP a veto on post-Brexit arrangements.

Speaking on BBC’s The View, Mr Smith did not deny that a NI-only referendum was on the table.

He said there were “a range of options” for finding consent for the plans.

Mr Smith said that a number of options would be looked at to resolve the issue but did not go into details.

The issue of Northern Ireland’s consent – and how it is achieved – for post-Brexit arrangements has emerged as a key factor in negotiations.

It would then vote to maintain the arrangements every four years.

Stormont’s power-sharing government is currently not sitting – it collapsed two-and-a-half years ago amid a bitter row about a green energy scheme.

The assembly previously operated under a system of “parallel consent”, in which proposals must be backed by a majority of both unionists and nationalists. As such, nationalist parties and the cross-community Alliance Party have criticised the prime minister’s proposals as giving the main unionist party, the DUP, a veto.

On Thursday, Mr Johnson and Taoiseach (Irish prime minister) Leo Varadkar said they could see “a pathway to a deal” after meeting one-to-one, but Mr Varadkar maintained there were still issues over “consent and democracy”.

The secretary of state added that the “positivity” emerging from talks between Boris Johnson and Leo Varadkar gives him “great heart”.

He said both governments seem to be on the track of coming to an accommodation.

On Thursday, the prime minister and taoiseach (Irish PM) spoke for more than two hours, including a one-to-one discussion during a walk in the grounds of Thornton Manor in north-west England.