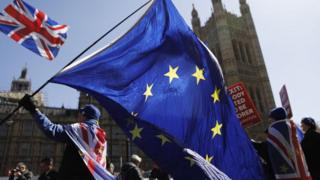 Labour has tabled a cross-party motion to stop a future prime minister pushing through a no-deal Brexit against the wishes of MPs.

The party plans to force a vote on Wednesday, which would give MPs control of the timetable on 25 June.

Labour says if the motion passes, MPs will be able to introduce legislation to avoid a no-deal scenario at the end of October.

Some Tory leadership hopefuls have said they would leave the EU without a deal.

The government normally controls business in the Commons – but MPs have previously seized control to legislate in favour of extending the Brexit process.

Leaving on a no-deal basis – without any agreement on the shape of the future relationship between the UK and EU – could lead to significant disruption.

The EU has previously said border checks would have to be brought in, affecting things like exports and travel and creating uncertainty around the rights of UK citizens living in the EU and vice-versa.

Labour’s Brexit spokesman Sir Keir Starmer said MPs “cannot be bystanders” while the next prime minister “tries to crash the UK out of the European Union without a deal and without the consent of the British people”.

“That’s why we are taking this latest measure to end the uncertainty and protect communities across the country,” he said.

“My challenge to MPs who disagree either with a no deal Brexit or proroguing Parliament is to back this motion and act in the national interest.”

Leadership candidates Dominic Raab and Esther McVey have both said they would consider shutting down Parliament early – proroguing – in order to drive through no deal.

The motion has cross-party backing, including from one Tory MP – Oliver Letwin – who is supporting Michael Gove in the Tory leadership contest.

Labour has tabled a cross-party motion for tomorrow that would hand control of the parliamentary agenda on Tues 25 June to prevent a future Prime Minister proroguing Parliament to force through a no-deal Brexit against the will of Parliament. pic.twitter.com/oG4URZok9C

Due to its confidence and supply agreement with the Democratic Unionist Party,