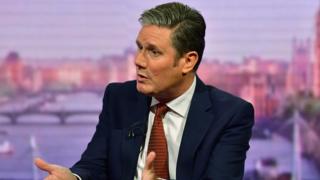 Labour has said it is “more important than ever” that Parliament is recalled after the government published its no-deal Brexit assessment.

Shadow Brexit secretary Sir Keir Starmer said the Yellowhammer document confirms there are “severe risks” if the UK leaves the EU without a deal.

MPs forced the government to release the file before Parliament was suspended – or prorogued – on Tuesday.

The government said no-deal mitigations would be published in due course.

Sir Keir said recalling Parliament would allow MPs “the opportunity to scrutinise these documents and take all steps necessary to stop no-deal”.

His comments followed a ruling by Scotland’s highest civil court on Thursday that the government’s proroguing of Parliament was unlawful.

The Yellowhammer file, which is redacted in parts and almost identical to a version leaked to the Sunday Times last month, says a no-deal Brexit could lead to:

The document also says some businesses could cease trading, the black market could grow, and some adult social care providers might fail.

Michael Gove, the cabinet minister with responsibility for no-deal planning, said “revised assumptions” will be published “in due course alongside a document outlining the mitigations the government has put in place and intends to put in place”.

However, ministers blocked the release of communications between No 10 aides about Parliament’s suspension.

Publishing the information, he added, would “contravene the law” and “offend against basic principles of fairness”.

The government sought to resist the publication of the Operation Yellowhammer document, but lost a vote on the issue in the Commons on Monday, prior to the suspension of Parliament,