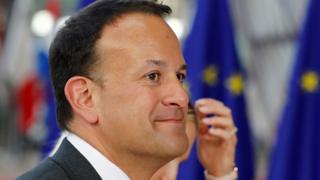 It is a “terrible political miscalculation” for UK politicians to believe they can get a better Brexit deal, the Irish PM has said.

Taoiseach Leo Varadkar was also critical of how the British government has approached the Brexit negotiations.

He said that many thought Ireland would “fall into line” and leave the EU too.

“We didn’t and we are not,” said Mr Varadkar, speaking in the Dáil (Irish parliament) on Tuesday.

“And some thought that when push came to shove that Ireland would be abandoned, that EU unity would break, and they were wrong about that.”

Mr Varadkar added that Mrs May was “not a bad negotiator”.

He said it took two years to negotiate the Withdrawal Agreement and while not perfect, it was a “finely balanced compromise”.

“I am a little bit concerned that some people in London seem to think that because the House of Commons failed to ratify that agreement that automatically means they are going to get a better one,” he added.

“That is a terrible political miscalculation. I hope that is not the one that is being made across the water.”