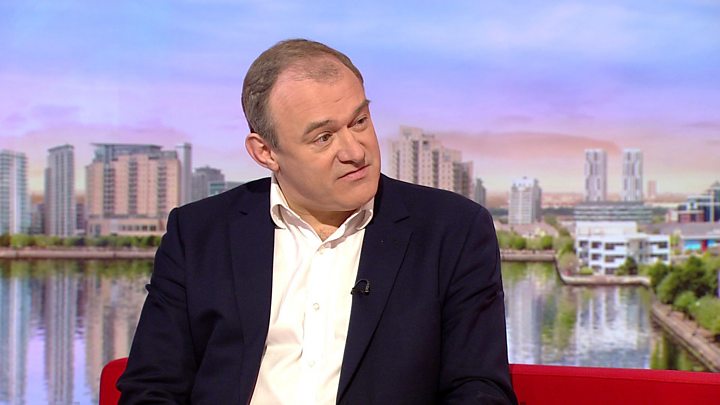 Liberal Democrat acting leader Sir Ed Davey has called for pro-European “progressives” to unite in a push for a soft Brexit in upcoming trade talks.

In a speech in Manchester, Sir Ed said his party will “never stop fighting” to have the “closest possible relationship” with the EU.

They will be on a “damage limitation exercise to stop a hard Brexit hurting British people”, he said.

Trade talks with Brussels are due to start in March.

In his speech at the Science and Industry Museum, Sir Ed conceded that the campaign to stop Brexit was over.

But he said he wanted opportunities for British citizens to study and receive free healthcare in Europe to continue after the end of the transition period – which will see the UK follow EU rules – in December.

Sir Ed said the Lib Dems wanted to see the continuation of the European Arrest Warrant, the Erasmus university study programme and British access to European Health Insurance Cards after the UK’s departure.

He said the 11 Lib Dem MPs would be prepared to “work with anyone” in the UK to “reunite our country”.

“To defend these values – and to start winning again – we must regroup.”

He said Brexit on Friday would be a “heart-breaking” day for pro-Brussels campaigners, but added: “We must no longer be a country that is divided by Leave and Remain.”

Sir Ed is standing in as co-leader of the party, along with Lib Dem president Mark Pack, after Jo Swinson was forced to step down when she lost her East Dunbartonshire seat at the election to the SNP.

Her successor will be selected on 15 July.

The UK government has insisted trade talks with the EU should not extend beyond 31 December this year, when the transition period comes to an