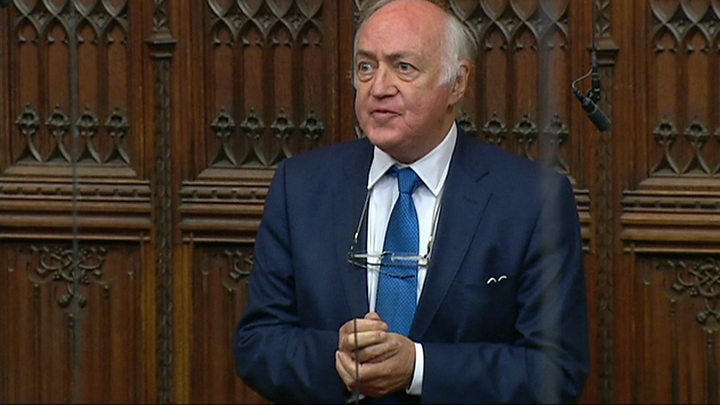 A government bill which overrides key parts of the Brexit divorce deal has been strongly criticised in the House of Lords.

Labour peer Lord Falconer said the bill’s “stinking hypocrisy” would make it harder for the UK to hold foreign dictators to account.

Former Tory leader Lord Howard said the bill would damage the UK’s reputation as a protector of the rule of law.

But a government justice spokesman said it was needed in case trade talks fail.

Lord Keen, who is also Advocate General for Scotland, said it was “not unprecedented” for UK legislation to “cut across” international obligations.

He added the bill would give ministers powers to ensure a legal void does not ensue if talks with the EU over the future of the Irish border break down.

The latest round of trade talks – between EU negotiator Michel Barnier and UK representative Lord David Frost – is taking place in London and is due to end later, amid rising pressure to get a deal.

But the UK Internal Market Bill has sent shockwaves through the process, with the European Commission saying it would constitute an “extremely serious violation” of the withdrawal agreement.

On Thursday the Brussels-based body called on UK to change the bill by the end of the month to “re-establish” trust.

It followed a two-hour meeting between Cabinet Office Minister Michael Gove with the Commission’s Vice-President Maros Sefcovic to explain the UK’s actions.

The bill, published on Wednesday, will require the approval of the House of Lords as well as MPs before it can become law.

It addresses the Northern Ireland Protocol – an element of the withdrawal agreement designed to prevent a hard border returning to the island of Ireland.

Under the terms of the withdrawal agreement signed by Prime Minister Boris Johnson in January, the UK must resolve differences over border arrangements with the EU through a special joint committee.

But the new bill would give UK ministers the power to modify or “disapply” rules relating to the movement of goods due to apply in Northern Ireland from 1 January.

The government has accepted the bill breaches the withdrawal agreement, but says the powers are required to ensure that trade across England, Wales, Scotland and Northern Ireland – the UK internal market – is protected in all circumstances.

During an urgent debate on the bill, former Lord Chancellor Lord Falconer said the government’s acceptance of the breach would be “thrown in the UK’s face for years”.