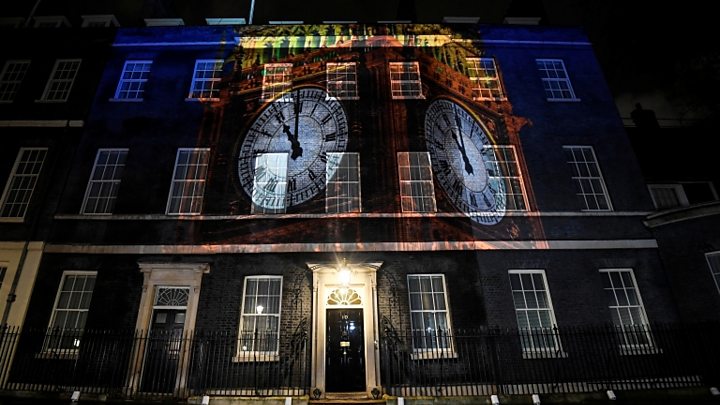 European leaders have expressed sadness at the UK leaving the EU, with France’s Emmanuel Macron emphasising Britain’s “unrivalled ties” with the French.

Mr Macron said he was “deeply sad” while the EU’s Guy Verhofstadt pledged to try and “ensure the EU is a project you’ll want to be a part of again”.

Celebrations and anti-Brexit protests were held on Friday night to mark the UK’s departure.

Ex-Brexit Secretary David Davis said everyone would be a winner in the end.

The UK officially left the European Union on Friday at 23:00 GMT after 47 years of membership, and more than three years after it voted to do so in a referendum.

Brexit parties were held in some pubs and social clubs as well as in London’s Parliament Square, as the country counted down to its official departure.

In Scotland, which voted to stay in the EU, candlelit vigils and anti-Brexit rallies were held.

In a message released on social media an hour before the UK left, Prime Minister Boris Johnson vowed to bring the country together and “take us forward”.

“For many people this is an astonishing moment of hope, a moment they thought would never come,” he said. “And there are many of course who feel a sense of anxiety and loss.”

In an open letter to the British public, French President Mr Macron said he was thinking of the millions of Britons “who still feel deeply attached to the European Union”.

“You are leaving the European Union but you are not leaving Europe,” he said. “Nor are you becoming detached from France or the friendship of its people.

“The Channel has never managed to separate our destinies; Brexit will not do so, either.”

Mr Macron also said the EU must learn lessons from the “shock” of Brexit, adding: “I am convinced therefore that Europe needs new momentum.”

And he defended the way France acted in the Brexit negotiations, saying neither the French nor anyone else in the EU was “driven by a desire for revenge or punishment”.