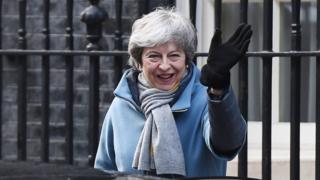 Prime Minister Theresa May will try to persuade MPs for a third time to back her Brexit deal over the coming days.

The Commons will vote on her withdrawal agreement by 20 March, after previously rejecting it by 230 and then 149 votes.

On Thursday, MPs voted to ask the EU to delay Brexit beyond the current 29 March departure date.

European Council President Donald Tusk said EU leaders could be open to a long extension “if the UK finds it necessary to rethink its Brexit strategy”.

Over the past week, a series of Brexit votes have taken place in the Commons.

On Wednesday, MPs voted to reject the idea of the UK leaving the EU without a deal under any circumstances.

However, that vote was not legally-binding – and under current law the UK could still leave without a deal on 29 March.

Then, on Thursday, the Commons voted by 413 to 202 to seek an extension to Article 50 – the legal mechanism by which the UK is due to leave the EU.

It is still technically possible that we could leave the EU at the end of this month – the law has not changed.

But politically it is now almost entirely out of reach.

The prime minister is accepting she will miss one of the biggest targets she has ever set herself.

Thursday’s vote was awkward for another reason, as it again displays the Conservatives’ fundamental divisions.

This is more than a quarrel among friends, but a party that is split down the middle on one of the most vital questions this administration has posed, with cabinet ministers, as well as backbench Brexiteers, lining up to disagree with Theresa May.

Any delay will require the agreement of all other 27 EU members, with talks about possible conditions for an extension to take place before next week’s EU summit, which begins on Thursday.

If MPs approve Mrs May’s deal before the Brussels summit, she could ask the EU to delay Brexit until 30 June.

Alternatively, there could be a much longer delay, requiring the UK to take part in elections for the European Parliament in May, the prime minister has said, in the event her deal is not approved.

Will EU leaders agree to an extension?

In contrast to the sound and fury coming out of Westminster on Thursday night,